The Vitis-Přibyslav fault system is the NNE–SSW striking and ca. 200 km long, steeply WNW dipping fault system, which runs from the Alpine thrust front (WALLBRECHER ET AL., 1991) in Austria, from Perg via Zwettl and Vitis to Groß Eberhards (A). From there it continues to the Czech Republic territory and it runs as the Přibyslav fault (Přibyslav mylonite zone) via Slavonice, through Dačice to Jihlava and Přibyslav, where it rotates to NNW. From there it continues to surroundings of Chotěboř and then probably to the area of Jeřišno.

According to the Austrian database (see http://resource.geolba.ac.at/structure/161) the NNE–SSW striking, steeply WNW dipping fault system is considered as the Vitis fault. It runs from Amstteten via Zwettl and Vitis to Groß Eberhards (A), from where it continues as the Přibyslav mylonite zone. The Vitis fault can be traced as a mylonite or ultramylonite zone (see the Geological map of Austria 1 : 50 000, gk018 Wietra and gk35 Königswiesen) or the mylonite complex with gneiss (see the Geological map of Austria 1 : 50 000, gk019 Zwettl) when it runs through the Bohemian Batholith.

The course of the Vitis fault was divided into 10 azimuth-different Fsections between Perg and Zwettl, as the fault trace gradually rotates from the NE–SW direction in the south into the NNE–SSW direction near Zwettl. North of Zwettl, the Vitis fault is already running with the same azimuth as the Přibyslav mylonite zone. In this section, up to Groß Eberhards (A), the Vitis fault acts as a series of parallel faults disrupting the band of cordierite-sillimanite paragneiss between Weinsberger granite and Rastenberger granodiorite bodies of the Bohemian Batholith.

According to http://resource.geolba.ac.at/structure/162, the Freyenstein fault means ca. 45 km long NE–SW, partly NNE–SSW trending Subfault System, which extends from Windpassing to Freyenstein, Ysper and Klein-Nondorf (SW of Grafenschlag). The fault is associated with the Vitis-Přibyslav fault system and it forms the eastern boundary of the southern edge of the Bohemian Batholith with the band of cordierite-sillimanite paragneiss.

The Přibyslav Mylonite Zone (term was introduced by KOUTEK, 1935), also known as the Přibyslav crustal fault (WEISS, 1977), is the northern part of the Vitis-Přibyslav shear zone. In the Czech territory it manifests itself as a wide (1.5 to 4 km) zone of more or less parallel faults running generally in the NNE–SSW direction (at least to Přibyslav). Then it turns to NNW. The bands of mylonites and mylonitized rocks appear in this wide zone.

The Přibyslav mylonite zone has a distinctive display on the gravity map. Fig. 1: Display of the Přibyslav mylonite zone (blue line) in the gravity map of the Czech Republic including an indication of Fevidence points.

The Vitis Shear Zone mainly transects the Weinsberg granite. Cataclastic deformation was the dominant deformation mechanism in this zone. Foliation and lineation are developed only weakly. The mylonites showing a well-defined steeply WNW dipping foliation and a stretching lineation plunging gently to NNE can be found in the narrow zones. The older fabric is superimposed by a later deformation which shows slickenside features and extensional veins filled with quartz and chlorite. Cataclastic microstructures are predominant in the Vitis Shear Zone (Fig. 2d). The microfabric is defined by quartz and feldspar porphyroclasts lying in a fine-grained matrix of quartz, feldspar, mica, and chlorite. The cataclasites were formed as a result of brittle deformation of quartz and feldspar clasts from Weinsberg granite (see BRANDMAYR ET AL., 1997).

The Přibyslav Mylonite Zone is very similar to the Vitis shear zone. Its angle of dip of the NNE–SSW fault plane is assumed to be very steep (almost subvertical) with general dipping to the WNW. The opposite dip to ESE (almost to E) was frequently described, too. The Přibyslav Mylonite Zone is a complex of unmetamorphosed rocks and mylonite or ultramylonite. The maximum of the Mylonite Zone thickness is 4 km, however mylonites and ultramylonites nearby Přibyslav are formed to system of lentils-like layers with a maximum thickness of 150 cm which thin out to the North, also to the South (ŠTĚPÁNEK ET AL., 2008). The protolites of mylonites of Přibyslav Mylonite Zone belongs to Moravian and Strážek Moldanubicum. Whereas the Ostrong Unit (with biotite or sillimanite-biotite gneiss or cordierite gneiss with local migmatization) dominates Moravian Moldanubicum and the Drosendorf Unit (with amfibolite, serpentinite, marble, erlan or granulite) dominates Strážek Moldanubicum.

The segmentation between the Vitis fault and the Přibyslav Mylonite Zone is not obvious. Possible segmentation is indicated by bands of the Varied series of Moldanubicum, consisting of various types of paragneisses with intercalations of bodies or bands of amphibolite (Rehberg amphibolite), serpentinite, marble, orthogneiss (Dobra gneiss), graphitic gneiss and mylonites. This band turns sharply from NNE–SSW to NW–SE west of Waidhofen an der Thaya.

The Vitis fault is not segmented by transverse faults according to Raster geological maps of Austria 1:50 000, sheets gK034 Perg; gk035 Königwiesen; gk018 Weitra; gk019 Zwettl. On the other hand, the band of mylonites is not continuous. It is possible to observe the concourse of the mylonite bands side by side or their branching.

The southern section of the Freyenstein fault (NE–SW) is segmented north of Fünfling by the NW–SE fault. This fault divides the FYS_01 Fsection into two sections with the same direction. A continuous band of mylonites with lengths 11 and 9 km was formed in both of them. The northern section (FYS_02) of the Freyenstein fault (NNE–SSW) is not segmented. Mylonites are arranged in short lentils following the fault line.

The W–E system of the supposed faults is captured from north of Polná to Jamné also at the sheet 23-24 Polná. The short W–E faults accompanied with N–S fault plane system belonging to Přibyslav Mylonite Zone divide the area into the fault blocks.

Scarp morphology of the Vitis or Freyenstein fault has not been monitored, yet.

. The morphological manifestation of the Přibyslav Mylonite Zone is not very pronounced. However, it is possible to observe a preferred orientation of some water cuts between Jihlava and Dačice.

Late Variscan mainly sinistral brittle-ductile reactivations of the NNE–SSW fault structure of the Vitis-Přibyslav fault zone with steep dipping to WNW caused a formation of the nape structures of zones, and during these movements the mylonite zone was formed (see BRANDMAYR ET AL., 1997).

The Přibyslav Mylonite Zone was created as a result of an underthrusting of the eastern edge of Moldanubian Unit with the Brunia microplate at c. 341–339 Ma, which led to extrusion of the Moldanubian rocks over the top of Brunia and propagation of the microplate edge as far west as the Zone (ŠTÍPSKÁ & SCHULMANN, 1995). Structural data around the Jihlava pluton (collected by SCHULMANN ET AL., 2014) suggest that the overlapping was followed by dextral west-side-up shearing along the Přibyslav Mylonite zone at c. 338–335 Ma (VERNER ET AL., 2006). The main ductile movement phase of the Přibyslav fault system is applied to the late Variscan (BÜTTNER, 2007). A large number of reactivations accompanied by steep dip of fault plane have indicated both sinistral shear motion (URBAN & SYNEK, 1995; DAŇKOVÁ, 2014), and dextral shear motion (SCHULMANN ET AL., 2014).

Brittle reactivation at the end of Variscan orogeny caused a sinking of the small tectonic block of the unmetamorphosed upper Paleozoic conglomerates nearby Stříbrné Hory village (KOUTEK, 1939).

Frequent Tertiary reactivations of NNE-SSW structures caused the sinking of the Anthracolithic and Tertiary sediments which led to the formation of the Boskovice furrow, Blanice furrow and hypothetical Jihlava furrow (VESELÁ, 1979, HOLUB & TÁSLER, 1980).

Long-term evolution of the Přibyslav mylonitic zone with ductile and later brittle deformations has been described based on kinematic indicators by KUBÁTOVÁ (1992) near Dačice and by DAŇKOVÁ (2014) near Jihlava and Přibyslav.

More detailed study on fault activity in late Cenozoic is missing, however the Vitis-Přibyslav fault system is considered extinct.

There is no evidence that this fault system was active in the Quaternary.

(See layer Local evidence on a map. The sites are listed in south-to-north order.)

The quarry is located 1.48 km to NE from the Na Nivách hill (622 m above sea level) at migmatized sillimanite-biotite gneiss of Ostrong Unit which is intensively affected by polyphase tectonic deformation. The significant mouldered mylonite zone runs through NW edge of quarry. The oriented rock sample of mylonite was taken from subzone with fault plane D 104/40. The microstructural kinematic indicators confirmed the normal fault with dextral strike-slip motion along striation L 122/40. A gradually embrittlement of deformation mechanisms was determined which is sign for several reactivations. A dilatation of volume (MELICHAR, 2002) was found because the young sideling-opened chlorite microveins were observed. 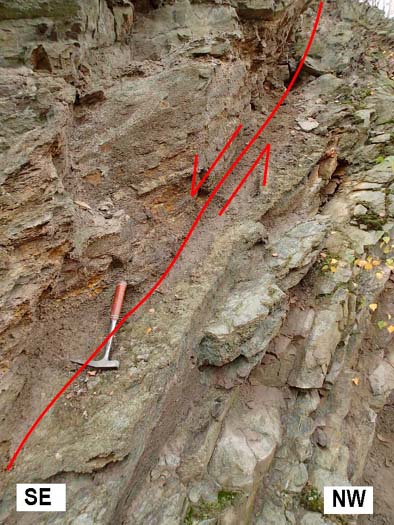 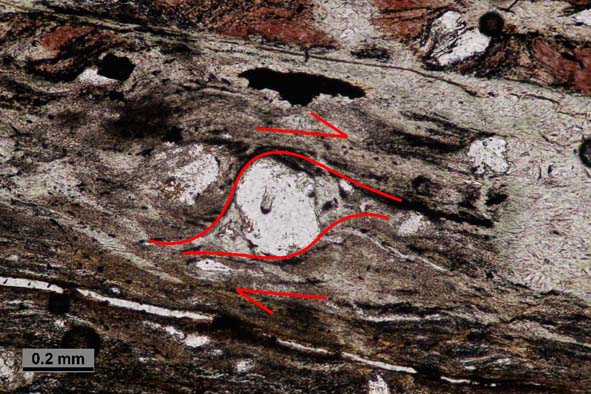 Fig. 3: The σ-porfyroclast of plagioclase as the kinematic indicator at the thin section of mylonite from Rančířov quarry. Photo L. Daňková 2014.


Přibyslav: the notch with the old quarry

The old quarry is situated by the roadside 800 m to the west from Ronov nad Sázavou castle at migmatized sillimanite-biotite gneiss and biotite gneiss of Ostrong Unit. The movements in the Ronov slight mylonite zone with orientation D: 96/88, which was measured on the notch at the edge of the quarry, have reverse fault character with sinistral strike-slip motion to N along striaton L: 186/56. 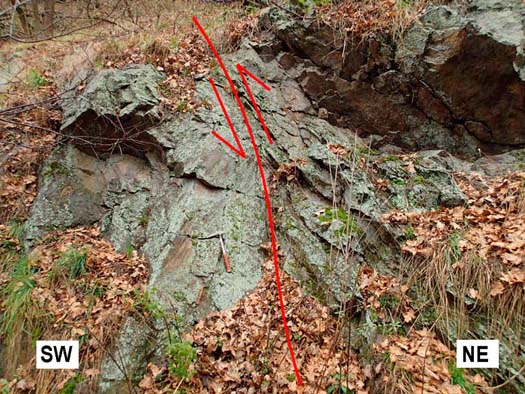 The old quarry is situated 1.4 m to the SSE from the Dvořákův kopec hill (548 m above sea level) at migmatized gneiss and migmatite with feldspar porphyroblasts of Drosendorf Unit. Several weathered dislocations were detected in the quarry. According to the thin section description the movements of the mylonite zone with fault plane’s orientation D: 90/75 have reverse fault character with sinistral strike-slip motion to SSE along striation L: 164/45. 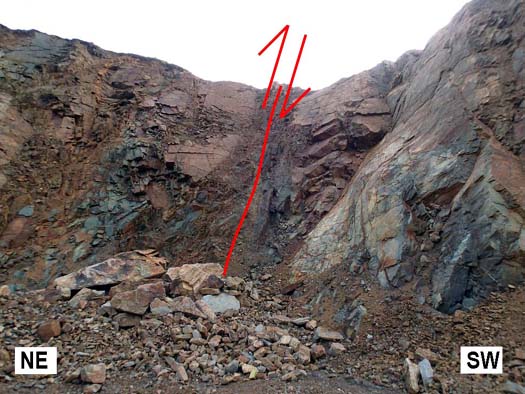