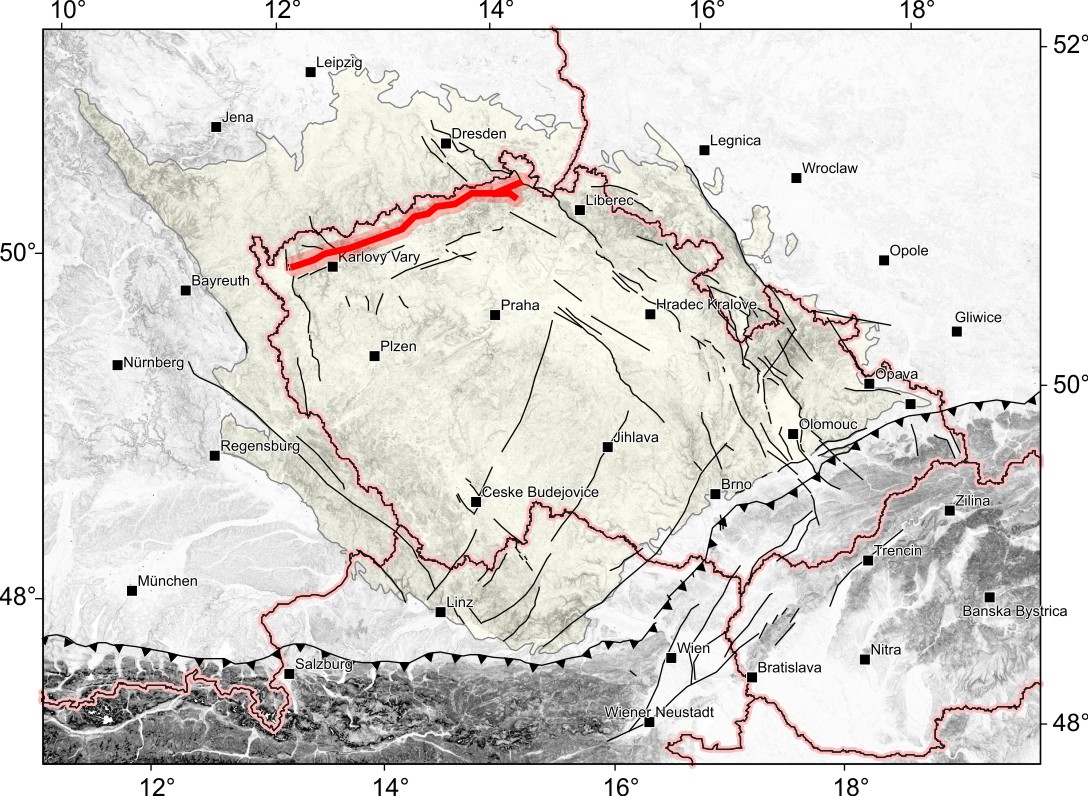 The course of the fault is defined in the literature by the municipalities of Horní Žďár in the Sokolovská basin (Rojík et al. 2010) in the west and Jílová near Děčín in the east (Malkovský 1977, 1979, 1987).

The upper block is represented in the dominant middle part by the exposed crystalline formations of the Krušné Hory Mountains; towards E, probably due to its tectonic inclination, relicts of Upper Cretaceous rocks begin to appear on it, which further change into a continuous cover. In the tectonic lower block, the cover of Upper Cretaceous sediments and tertiary formations of the North Bohemian and Sokolov basins is mostly preserved, which are denuded / eroded to varying degrees in sub-blocks.

Towards the east (Fig. 1) the Krušné hory fault flows smoothly into the Děčín fault and further east into the Česká Kamenice fault field - in both cases, those are wide systems of mostly sub-parallel faults of mainly the E - W direction. These faults are manifested by the violation of sediments of the Czech Cretaceous basin, while the area of conservation of Tertiary sediments in the tectonic lower crust ends towards V in the vicinity of Ústí nad Labem. In the vicinity of Česká Kamenice, this system is followed by a directionally different zone of faults, referred to as the Doubice fault field. This system of faults in the NNE - SSW direction takes over the function of the boundary between the higher NNW to NW circle and the lower SW circle; both shrubs are represented in subsurface parts by Upper Cretaceous sediments of different stratigraphic levels. The faults of the Doubice field end at the Lusatian fault in the section between the municipalities of Kyjov and Brtníky. Their possible continuation through the Lusatian fault to the NE is not traceable in the rocks of the Lusatian pluton (Malkovský 1977, 1979).

The Krušné Hory Mountains fault is undoubtedly one of the basic building blocks of the Eger Graben, because it forms its NW edge fault and its course consistently correspond to the geometry and deep structure of this higher-order volcano-tectonic structure (Fig. 2). According to the basic idea of the development of the Ohře rift (Kopecký L. 1987), the Krušné hory fault played a subordinate role in the initial and main volcanic phases, and its more significant revival did not occur until the end of the Neogene or the Quaternary (cf. Elznic et al. 2010).

The link between the origin of the fracture and the rift is also indicated by the fact that in the regional geological structure of the foundation it does not express itself as an important structure or interface; nor even causes significant geophysical manifestations (Malkovský, 1985).

History of research: The name of the fault was introduced by Suess (1903). Label Ore Mountain Fault, used in connection with the storage conditions of Upper Cretaceous sediments by Zahálka (1914), did not take place. In connection with the volcanism of the Central Bohemian Highlands, Hibsch (1891) named the eastern part of the Krušné hory fault.

As part of the post-war massive increase in interest in geology, several stages of research took place, in which the construction of the North Bohemian basins, incl. Krušné hory fault was paid considerable attention to. Immediately after World War II, the stage of searching for, verifying, and extracting raw materials from own resources began due to the limited possibilities of importing raw materials from the surrounding, by war similarly damaged countries. During the 1960s, the state's raw materials policy stabilized and most of the emerging, largely archival research works / reports already included quality study results even of those geological aspects that more or less went beyond the extraction of raw materials. Z. Brus, V. Cílek, J. Kavka, N. Krutský, P. Šantrůček, J. Šindelář and others were connected with exploration works on raw materials.

Exploratory work on the exploration and verification of coal and other minerals was increasingly accompanied and supported by basic research in virtually all thematic areas related to the development and disturbance of the coal basins of northern Bohemia. Although they were primarily focused on the North Bohemian and Sokolov basins, most of them more or less touched on some aspect of the Krušné Hory Mountains fault. The authors of major works include, for example, Č. Bůžek, J. Čadek, L. Domácí, A. Elznic, Z. Feyfar, V. Havlena, Z. Hokr, S. Hurník, G. Kačura, E. Knobloch, M. Kužvart. ,, M. Malkovský, V. Škvor, M. Štemprok, J. Tyráček, J. Václ, J. Vachtl, M. Vilímek, O. Zelenka and others. M. Váně represented an extraordinary expert on the issue of construction of the wider surroundings of the Krušné hory fault as a representative of industrial geology, who was able to keep up with the research sphere in terms of the quality of work and at the same time excelled in unrivaled local knowledge and amount of works.

After J. E. Hibsch, L. Kopecký comprehensively dealt with the issue of the development of the Eger Graben and especially the volcanism connected to it, followed by O. Shrbený and J. Ulrych. A. Kopecký and P. Vyskočil dealt with the issue of neotectonic activity of the fault. D. Marek, J. Rybář and B. Košťák, for example, dealt with engineering-geological issues associated with gravitational phenomena and the influence of mining on the slope of the Krušné Hory Mountains. Basic and deposit research of this period was accompanied by several stages of geological mapping of the state territory. The result of these works was a mapping of the entire course of the fault, finding out the basic features of both the fault itself and the storage conditions of its surroundings and the basic characteristics of the phenomena that are related to it.

Approximately since the early 1990s, another stage of research has been underway, when reducing pressure on industrial aspects, knowledge of the basic features of the geological structure of the Krušné Hory Mountains and, last but not least, significant development of technical equipment and research methods have led to the creation of works, which are significantly specially focused to solve individual problems. Selected works of this group are cited below. Deformation styles at the Krušné hory fault

According to Malkovský (1979), the typical features of the fault are the laterally changing character of the fault - flexure (Fig. 3) and also the changing direction.

Havlena (1982) and Hurník & Havlena (1984) raised a well-known and often published question concerning the nature of the Krušné hory fault. They, on the basis of the fracture-free removal of Lower Miocene sediments often observed in mining works, marked the Krušné hory fault as a great fold (ie the character of flexure). According to this idea, the ascent of the Krušné Hory Mountains took place simultaneously with sedimentation in the Podkrušnohorské basins, accompanied by the faultless withdrawal of Miocene sediments. Only later did a system of faults emerge; the continuing uplift was realized by movements on them, accompanied by the squinting of the inclination of the drawn layers. The protruding layers reach vertical and even overturned inclinations in places. It is clear from the lithological characteristics of the seams that sediments could not have formed near the edge of the sedimentation pool, but originally continued through the Krušné hory fault to its northern surroundings. This refutes the assumption of some authors that the process of ejection took place in a synsedimentary manner with the formation of Lower Miocene formations (Elznic et al. 2010).

The dominant flexural character is mentioned by Malkovský (1977, 1979) in the section between Prunéřov and the former village of Kralupy near Chomutov. Here, according to the findings of Plzák (1968), the interface of Miocene sediments and crystalline rocks has the same slope as the slope of the Krušné Hory Mountains, on which its course was documented. The interface is interpreted as a continuous drawn-out base of sediments without breaking by a break at the foot of the slope. A similar continuous extension of the place to the vertical positions is documented in the next section of the break between Janov and the former. S. K. Neumann mine near Litvínov (Malkovský 1979).

However, in most of its course, the Krušné hory fault clearly has the character of a fault. Malkovský (1977) states that its western section, mostly in the Sokolov basin between Dolní Niva and Vernéřov, is typically a turning point. Similarly, the section in the North Bohemian Basin between Jirkov and Janov and further in the eastern part of the fault from the former S. K. Neumann mine near Litvínov via Osek, Střelná, Krupka to Jílové near Děčín again has the character of a fault (Malkovský 1979).

More detailed characteristics of the breach in those parts of the fault where the fracture-free ejection is dominated are contained mainly in unpublished mining documentation. A published case is, for example, the work of Váně (1961), which describes the bending of a layer near Hrdlovka. The bend begins in the deepest part of the basin and from there in a section 1.5 km long, its slope gradually increases towards the Krušné hory slope up to 52 ° at the edge of the basin. In the bent part, the layer is significantly crushed (Malkovský 1985).

In parts of its course where the Krušné hory fault has a demonstrable character of dislocation, its characteristics were documented in several localities.

In the Sokolov basin, the fault has a predominant direction ENE - WSW and a steep inclination to S. The main fault and the zone of accompanying violations were uncovered in the former uranium quarry Odeř (Rojík et al. 2010). The exposed main fault had the character of a decrease with an inclination of 60 ° to S and an amplitude of about 300 m. Tertiary sediments were deformed into a flexure with an inclination of layers up to 60 °. However, in the fault zone there were also associated faults of the nature of thrusts. In the Sokolov basin, the fault is accompanied in some parts by basalt outflows (Hroznětín part of the basin), up to 20 m thick crushing zones and hydrothermal alterations with quartz veins (Rojík et al. 2010).

In the North Bohemian Basin, the characteristics of the main fault were directly observed and measured on several surface outcrops and technical outcrops of the fault and its zone of accompanying failure (Elznic 1963, Marek 1985, Váně 1985, Rybář 1997, Rybář & Košťák 1998, for more see chapter 7). In addition, archival reports mention a number of occasional and extinct outcrops, such as the outcrop at the housing estate in Střelná, borehole GÚ-35 (slope of the fault plane 40 °; to the south - see Malkovský 1985).

In the easternmost part around Libouchka, the Krušné hory fault has the character of a band up to 2 km wide, consisting of 3-4 sub-parallel faults (Adamovič & Coubal 2020).

The continuation of the fault towards the framework of the Krušné hory fault s.l. also has a character of a fault, where it passes into the Děčín fault field, formed by a set of faults in the direction ENE - WSW, limiting narrow parquet covers. The blocks are usually inclined at angles of 10 - 28 °, but they are documented up to inclinations exceeding 45 °. These faults are violated by a sub-equidistatic system of faults in the direction of the WNW - ESE, on which there were mainly right-hand sub-horizontal shifts, evidenced by striations.

In the section between the Děčín fault field and the Lusatian fault field (the so-called Doubice fault field), the Krušné hory fault s.l. has the form of one to two subparallel fractures with a relative decrease of SE blocks, which are in some places dislocated by faults of the E - W direction, the reactivation of which was significantly contributed by the horizontal shift (Adamovič & Coubal, 2020).

(See layer Local evidence on a map. The sites are listed in south-to-north order.)