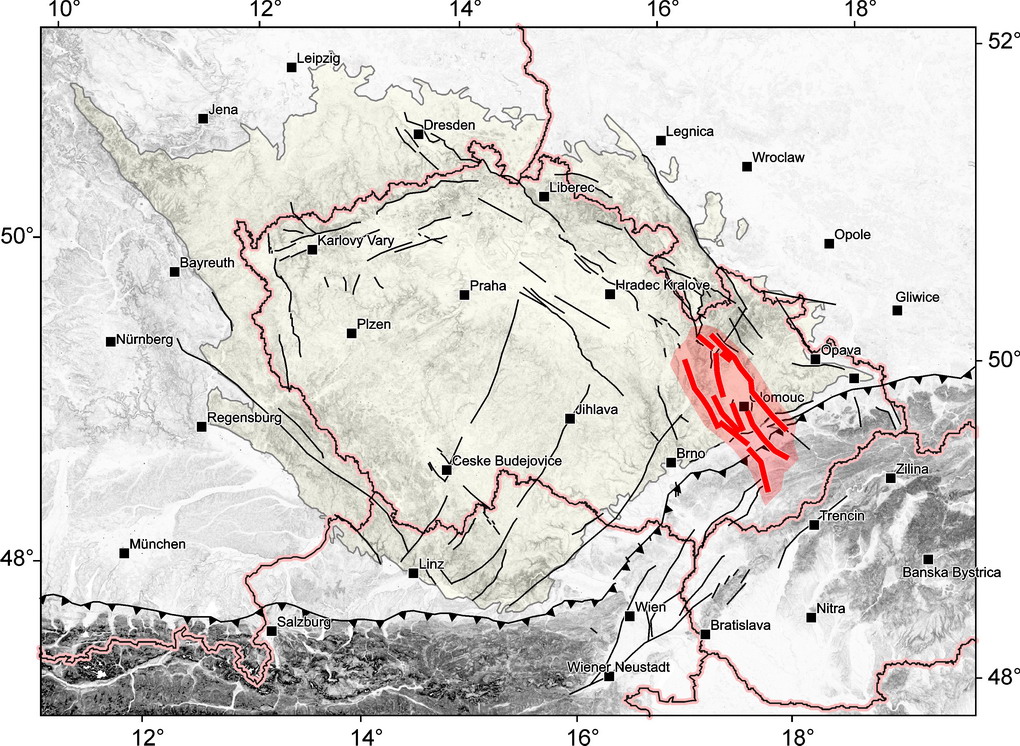 Haná Fault Zone (HFZ; term introduced by Mísař 1965) is a prominent NW-SE oriented, 30 to 40 km wide and at least 100 km long fault zone transecting the contact of the Bohemian Massif with the Outer Western Carpathians. Faults of NW–SE to N–S trends with large dip-slip component dominate. The HFZ coincides with distinct negative Bouguer gravity anomaly and hosts graben-like basins with Late Miocene to Middle Pleistocene sediment fill (the Upper Morava basin system; Růžička 1989, Špaček et al. 2015 and refs. therein).
HFZ is located in the southern part of seismically active region called the Nysa-Morava Zone (NMZ; Špaček et al. 2006, 2011, 2015) and it is formally delimited against the main part of NMZ (faults of the eastern Sudetes) by the Temenice Fault at the NE.
The SW limits against the aseismic region of southern Moravia is defined by the Nectava-Kvasice Fault System (link).
At the NW, the faults join those of the Bohemian Cretaceous basin and the limits of HFZ are formal there.
To the SE, the faults of HFZ continue into the flysch nappes of the Outer Carpathians, however, their role further to SE becomes unclear. The distribution of microearthquakes as well as the patch of volcanic rocks and springs of carbonated mineral water suggest increased mobility of NNW to NW striking faults far beneath the flysch zone. Disruption of transversally elongated gravity minimum of the Outer Carpathians in this direction suggests that this structure can continue towards the Pieniny Klippen Belt. Therefore, some faults in this region are included too and the HFZ, as defined here, extends between the towns of Moravská Třebová, Štíty, Šternberk, Lipník n. Beč., Fryšták, Luhačovice, Uherský Brod, Kroměříž and Konice.

HFZ is formed by a rather dense mesh of faults which have been mapped and linked together in various ways by different geologists. Some faults are associated with clear indications in gravity or magnetic fields, some form margins of deeper sedimentary grabens confirmed by drills. Fault scarp morphology is assumed to be largely erosion-dominated (as I suggest for most scarps in CZ). Pronounced scarps, locally over 200 m high are developed on many faults which bound the basin against the bedrock (Temenice f., Droždín f., Morava river f., Kosíř f., Lutín f., Vitošov f. Bušín f.).

In geological maps most of the faults within the basin are not represented perhaps due to their weak indications at the surface. Here, I prefer interpreting all the more pronounced discontinuities as faults because UMB is perspective for research of young faulting and these structures should not be missed. On the contrary, in the SE part of HFZ likely more faults are present than defined here but only those with clear indications continuing over longer distance are currently included.

In our map, shorter faults are grouped formally into several larger fault structures where their collinearity allows it, for sake of simplicity of their naming. Some traditional names are adopted and some faults are given new names (these are marked by an asterisk in the list below). The fault dip is inferred for some sections based mainly on ERT and few observations in trenches, or estimated from gravity field (via Linsser filtering). For some faults rough dip estimate is given based on the graben model. Reflection seismic profiles are not available in the north-western and central parts of the HFZ and they are mostly low resolution in the South-East.

(See layer Local evidence in the map. The sites are listed in south-to-north order.) 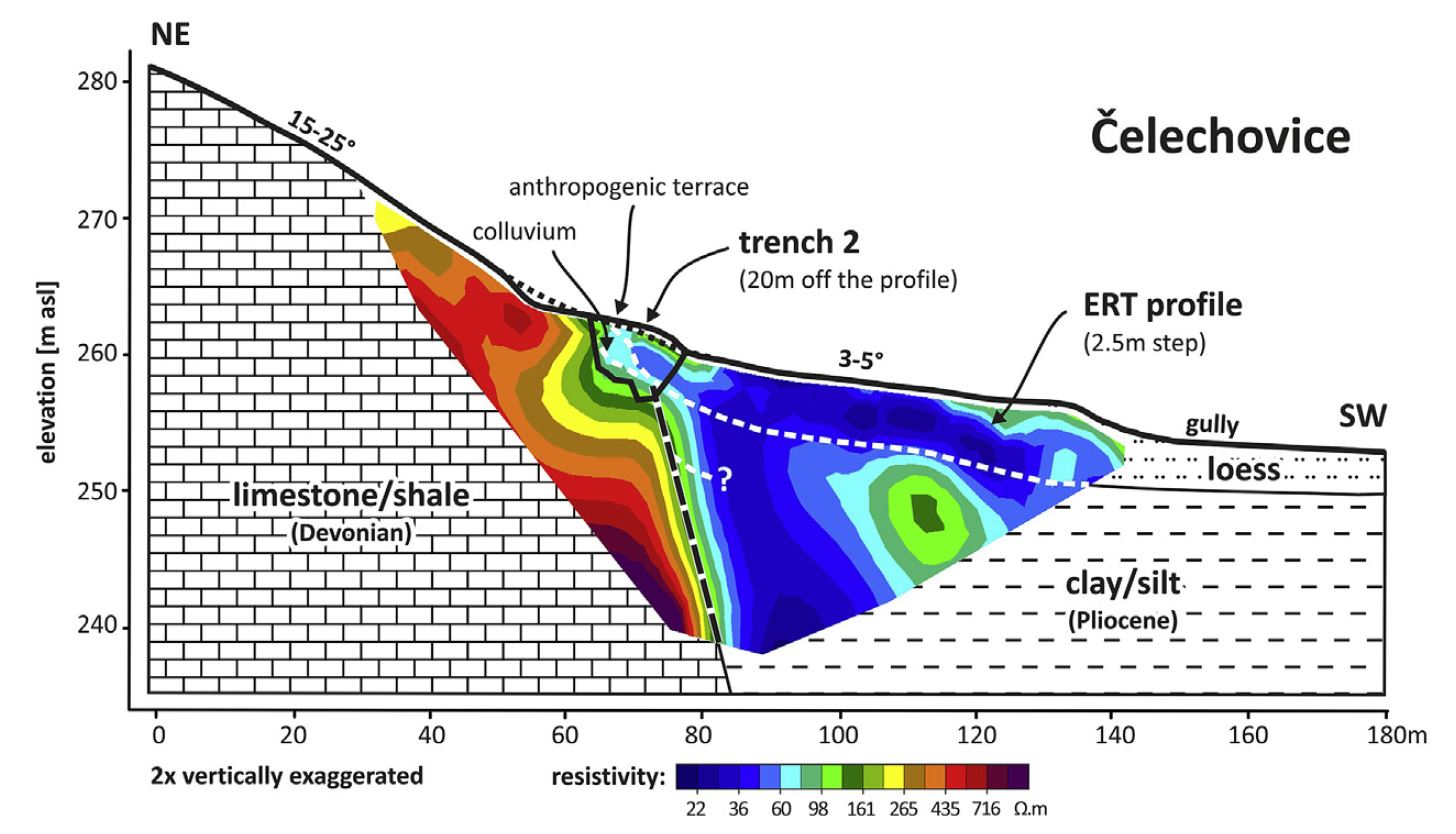 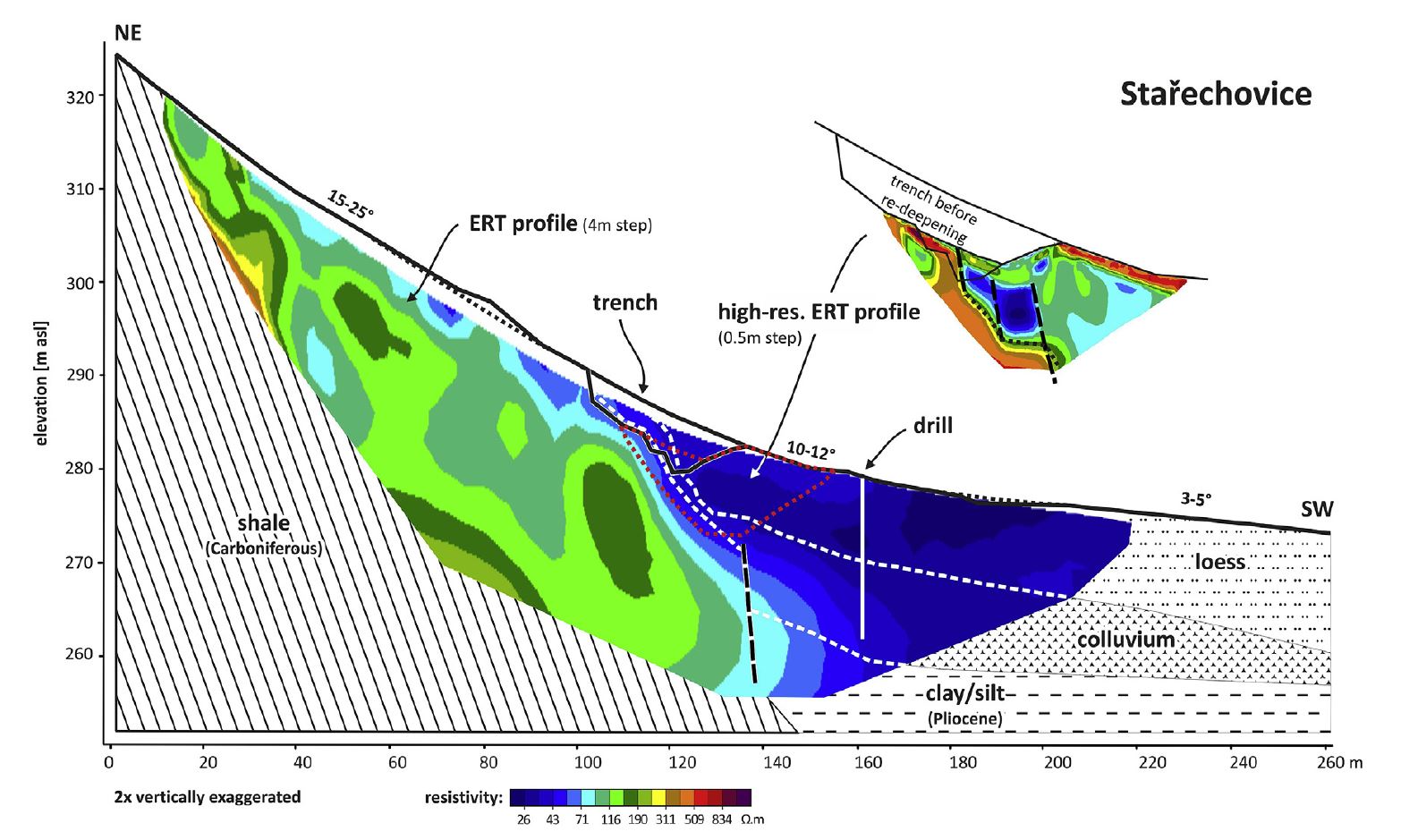